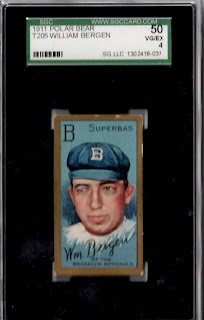 But recently, the thrill of the chase has gone cold. I cannot muster much enthusiasm in the service of tracking down a nice copy of a 1968 Dick Kenworthy or others of its ilk.

Sure, I find some stray excitement in scoring hard-to-find oddball/test issues, but even then the rush is relatively unleaded.

So it has become clear to me that a change in collecting priorities is in order. And I think I've located the perfect fix: pre-war cards (that is, anything issued in 1941 or years prior).

(I needed a way to constrain my goals, and limiting myself to Brooklynites has the added advantage of being budget-friendly, because, well, let's just say that the pre-war Brooklyn squads were not littered with Hall of Famers.)

This 1911 T205 William Bergen was my first purchase, and it was a decision based largely on aesthetics. The gold-bordered T205 issue is a beautiful set, and I'd argue that the Brooklyn cards, with their deep blue colors and unfussy design, are particularly attractive.

You'll note that Bergen is listed as a member of the “Superbas.” In this era, team nicknames were essentially fluid-- the Brooklyn NL team was known alternately as the Superbas, Robins, Trolley Dodgers, and just plain Dodgers.

Note as well the hat that our Bill is wearing, which is short brimmed and balloons out on top like a hot tray of Jiffy Pop.

Bergen was a catcher whose 11-year career started with Cincinnati in 1901 and ended with Brooklyn in 1911. He put the “dead” in deadball, managing just two home runs and a .170 average in over 3,000 career at bats.

As fate would have it, one of those home runs came in Bergen's very first game-- he wouldn't get his second and last until 8 years later.

Bonus fun fact: Bergen held the record for most at bats without being hit by a pitch until Mark Lemke broke it in 1997.

Bonus less-fun fact: His brother Marty was a catcher for Boston who murdered his family and committed suicide in 1900.
Posted by sliced tongue at 5:03 PM

I Read the News Today...

About a Lucky Man...

sliced tongue
A bout? Me?